WWII POW How I Survived 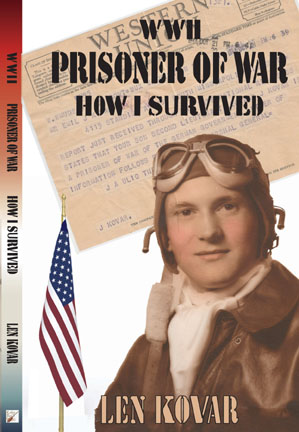 DESCRIPTION – World War Two Prisoner of War: How I Survived is the true story of Second Lieutenant Leonard J. Kovar and his battle to survive as a prisoner of war during World War II, as told by him. Mr. Kovar was a bombardier/navigator when it was shot down during its eleventh mission.  He parachuted out of his fiery bomber into a sky filled with heavy flack, exploding bullets and screaming German fighter planes.

After landing behind enemy lines, Lt. Kovar struggled to avoid capture by enemy soldiers and civilians angry about the damage done by American bombs. This is a candid telling of his eventual capture and his incredible battle to survive life as a prisoner of war at the end of World War II. He details the stamina required to endure various camps and death marches in advance of the oncoming Russian army during the worst winter storm ever recorded in European history.

He provides unique insight into the interactions between prisoners of war and German soldiers that is rarely seen in this kind of story.  His is an honest account of what it took to survive. This story is a fresh look at a war that has faded into history but has not faded from people’s minds.

If honest accounts of war stories are what you like, ORDER your eBook copy now!

Or, if you like to hold a book in your hand and turn the pages, ORDER your soft cover copy now!

“Thank you for taking the time to talk wth our Junior ROTC students. Keeping a freshman class of nearly 40 students focused and on task can be difficult at times, but you had them mesmerized with your story. We had our history book come alive!”  – Kevin R. Houdek, Lt. Col. USAF (Ret.)
“WWII PRISONER OF WAR: HOW I SURVIVED tells the story of Len Kovar’s experiences as a Prisoner Of War in Germany after his B–24 Heavy Bomber was shot out from under him by enemy fire over Budapest, Hungary during World War II. He tells his compelling story in a sensitive way without dwelling on the horrors of war or the depravity of captivity. It is a book that is hard to put down. Len is an excellent writer!”— Floyd Mellon, 1st Lieutenant US Army
“I have always had an interest in WWII and have read other war novels. WWII PRISONER OF WAR: HOW I SURVIVED is a striking, enthralling, blow–by–blow of a real man’s experiences in war.  The simplicity of the writing style makes this book an entertaining, easy read — as if it was a grandfather telling his story to friends and family. Len Kovar is an extremely relatable character — his narration of internal thoughts and struggles demonstrate a battle of fear, courage, worry, and hope that both the young and the old can identify with and understand. This is certainly a book to be shared and enjoyed by people of all ages and experiences.  Len Kovar does an excellent job turning an unfamiliar world into a relatable and identifiable story.”— Kayla Boos, sophomore at Colorado State University
“To the patriots of America who want to know why we are ‘the land of the free’ — it is because of the brave like Mr. Kovar. His book, WWII PRISONER OF WAR: HOW I SURVIVED, not only takes us behind enemy lines as a prisoner of war but reveals to us the war within the war. The interrogations, the intimidation, the endless marching are just the beginning of his story. His trials remind me of Valley Forge type of courage, persistent endurance and will to survive. Mr. Kovar brings us into a world few will ever know much less live to tell about.  These heroes reached deep inside and discovered the secret to self preservation — save each other. Mr. Kovar honestly recounts how he dug deep into his own bank accounts of courage and faith in order to muster a plain, pure will to overcome the imminent life threatening situations.  If you love America, read Mr. Kovar’s account of the heroes who were willing to make the ultimate sacrifice in order that we might live free.”— Michael Nantze, War History Buff
“Len Kovar writes about being shot down, captured and put into a POW camp during WWII. To escape being captured by the Russians, the Germans forced POW soldiers to march across Germany during the worst winter recorded in the history of Europe. Many died. This is the story of what it takes to survive the equal of the Bataan Death March.”— Dwight Davis, Military Historian
“This is an amazing story of survival and perseverance. I thoroughly enjoyed reading this very personal account of one man’s journey to return home from World War II after being shot down behind enemy lines. This book reminds me of how much so many people suffer and sacrifice during war. I am so happy I had the opportunity to read this book.”— Michelle Tambornini
“Thank you for sharing your insightful life in a book that will last for generations. It is absolutely awesome!”— Sandi Fong
“Your book is interestingly written with outstanding detail…just enough and not too much. It’s a fast read because it’s hard to put down!”— Pat Campbell
“This is the story of one man’s struggle to survive Nazi imprisonment. This includes: the European Death March in a 40 degree below zero blizzard without adequate clothing, food, shelter or rest. This is a witness to the will to live amid hunger, bombings, straffing and the brutality of war.”— Merle Austin