Dead in a Ditch

Author Jody Seay has written one heck of a great book, Dead in a Ditch: Growing Up in Texas and Other Near-Death Experiences. 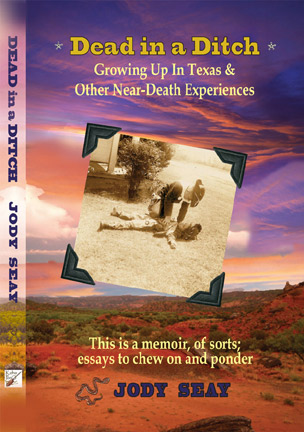 DESCRIPTION – this memoir will have you laughing until tears fall and you have to sit with your legs crossed. It’ll break your heart, too. If you want to laugh and cry with one crazy Texas-born hooligan, then this is the book for you.

BACK COVER – I come from a large family.  My Mother’s biggest fear was that one or all of us would die on her watch when we were babies and then children. As we grew up, her fear shifted a little – not just that we would die, but that we would be found Dead In A Ditch.  It was the ditch part that always made it seem so much worse, something drug or alcohol related, to be sure. Mother’s children crumpled up and tossed out the window like an old beer can. “Where have you been?” she would say, “I was worried sick. I thought you were dead in a ditch.”  This was Mother’s mantra.

If this hilarious book by Oregon author (but Texas born and bred) Jody Seay sounds good to you, ORDER your copy now!

Can’t wait? Would you like a peek inside the book? Click here for a sneak preview. It’ll take a few minutes to open all the way because it’s a 4MB file.

“…I could ramble all night about the things I enjoyed in the book but I’ll sum it up with the two best words I can think of right now, heartwarming and touching… I just felt you deserved to know how much your book and story is appreciated and how much it meant to me…” Sincerely, ChadArnold

Jody’s first book is called, “The Second Coming of Curly Red“. Her third book is called, “Almost a Murder“, which she co-wrote with Jim Lloyd. “Dead in a Ditch: Growing Up in Texas and Other Near-Death Experiences”  is Jody’s second book. You’ll probably want to read ’em all!