Dr. Coy F. Cross II has edited a number of books. This one is a beautiful book called, “The Path of God“. Each Sunday Unity Reverend, Carol Ruth Knox, shared how she encountered God that past week and she spoke about the lessons she learned in terms of quantum physics, philosophy, Eastern religions, and whatever subject caught her interest. Attendees left with helpful tools for their daily lives. Her powerful and still-relevant messages resonate today and can help you achieve a life of meaning, of service and of spiritual mastery by embracing The Path of God.   Also available as an eBook.

Dr. Coy F. Cross II has edited another book from Carol Ruth Knox called, “The Incredible Journey“. In 2013 Unity Center of Walnut Creek granted Dr. Cross the license for all of Carol Ruth Knox’s material. ” This is a 26-year-dream come true for me,” he says.  The Incredible Journey is the second of her writings that I have edited for publication. The book is based on Reverend Knox’s personal account of “an ever-evolving movement toward oneness with our God self”.  As she writes, “Life continually grows us.  We are never finished.”  You have already begun your “incredible journey,” hopefully, this book will help guide your course.   Also available as an eBook.

Dr. Coy F. Cross II has edited a third Carol Ruth Knox book called, “Prayer of the Heart: A Method of Transformation“. In this book, Rev.Knox explains how she survived some of the darkest times of her life (her Dark Night of the Soul). She shares, “I felt barren and bitter and experienced an overwhelming feeling of bondage. Do you? Do you feel as if you are inside a gray cave and you don’t know how to get out? Do you feel your relationships have not treated you right, our living situations don’t work, your general way of being is like a low-grade headache? Are you married to the ‘perfect person’, have a wonderful job, sleep for ten hours, but you are not at all renewed and have no zest?” Right. “I tried to think correctly,” she admitted, “and  even experienced spiritual ‘openings’ only to have them close down and I returned to the same ‘drone of consciousness’ and did not ‘break out of the cave’. Then I began the Prayer of the Heart work and entered a whole new level of spirituality.” This book is also available as an eBook.

Dr. Coy F. Cross II has written a heart-breakingly beautiful account of his transformation from confusion, grief, and fear into understanding of his spiritual path and deeper love. When Coy’s wife, Carol, was diagnosed with Stage III Ovarian Cancer, they were both shocked and horrified. Rather than uselessly railing at God, “Why? Why? Why Carol?” he was determined to find meaning in this tragedy and help Carol effectively deal with her trauma. Read this book if you have ever asked, “Why?”, ever faced tragedy, and are even now searching for meaning in your worst experiences. The Dhance is available in print.  The Dhance is also as an eBook.

One of our two memoirs is the true story of Second Lieutenant Leonard J Kovar and his battle to survive as a prisoner of war during World War II, as told by him.  Mr. Kovar’s plane was shot down during its eleventh mission.  He parachuted out of the fiery bomber into a sky filled with heavy flax, exploding bullets and screaming German fighter planes. He landed behind enemy lines, struggled to avoid capture by enemy soldiers and civilians angry about the damage done by American bombs. This is a candid telling of his eventual capture and his incredible battle to survive during various POW camps and death marches in advance of the Russian army during the worst winter storm ever recorded in European history. This book is an honest account and a fresh look at a war that has faded into history but has not faded from people’s minds. WWII Prisoner of War: How I Survived is available in print and also available as an eBook.

Read this a laugh-out-loud memoir by Oregon-based author Jody Seay called Dead in a Ditch: Growing Up in Texas and Other Near-Death Experiences. If you want to laugh and cry with one crazy Texas-born hooligan, then this is the book for you. The second of five kids, Jody led and followed her way into more mischief than most people can imagine. And it’s all true. Available as a print book; also available as an eBook.

Jody Seay’s first book has just come out in a second edition. An old character, which was taken out in the first edition for being too realistic, is now reinstated per Jody’s request. The book has a new cover, too. This book is a prize winner and will expand your mind, your heart and “make you see double as if you were hit upside the head”.  Look for The Second Coming of Curly Red, second edition – new and improved.

This candid, compelling, and compassionate novel could have been torn out of today’s newspaper headings.  One minute Texan Jimmy Heron is sitting next to his beloved wife of fifty years eating pie, the next minute she is dead in his arms; killed by a racist, woman-hating, semi-automatic gun-toting maniac. Shattered by Lou’s senseless death, Jimmy Heron hits the road – can’t sit still; can’t hardly breathe. He roams the western landscape looking for solace until he lands in the tiny pioneer town of Reliance, Oregon. Here he settles, figuring it is as good a place as any to wait until he dies.  With kindness and perseverance, however, his new neighbors delicately slide into his life. A lesbian couple eagerly awaiting the birth of their first child, a Native American ranch hand, a big-hearted dog, and a small band of generous people gently encourage Jimmy to deal with loss, death and love. Thus, Jimmy Heron begins his healing process.  The Second Coming of Curly Red will grab you by the heart and not let go. Also available as an eBook. 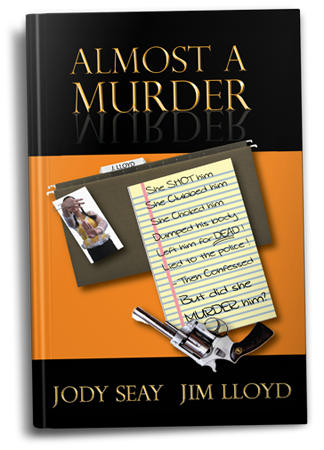 The book, ALMOST A MURDER, is a true story. Jody Seay (an award-winning author) and co-author Jim Lloyd (the Oklahoma lawyer who defended this case) draw readers into a gritty, shocking crime and the murder trial that follows. This is an unparalleled “you-are-there” view of a headline-making trial and epic battle.

When a wealthy “Son of Oklahoma” is slain by his delicate foreign wife, nobody saw it coming. To the Broken Arrow police, the brutal facts are clear. And everyone agrees that this sensational murder trial is going to be a fast track to a lethal injection. All that stands in the way is cub lawyer, Jim Lloyd, pitted against powerful political and financial forces. He reluctantly puts his family and future in jeopardy to defend a killer with no friends, no money, and who barely speaks English. This REAL LIFE LEGAL THRILLER is an exciting look into the procedures of the legal world by an award-winning author and the small town lawyer who defended the case.

JakiFey is our premier children’s book author. We are proud to introduce her first juvenile fiction story, The Last Goose Concert. A wonderfully mythic tale of a young girl, Freya, who is not perfect – she can be naughty at times – but she has a great heart, which the reader discovers on her journey to deliver the much needed supplies to Goosetown. The cart is heavy and Freya is not sure of the route. She makes some unwise choices and meets helpful animals along the way. Although she is much too young to bear this burden, she never gives up her task and with the help of her best goose-friend, they save Goosetown. At the end of her journey, Freya finds Momma

waiting with a big hug, hot apple cider and a roaring fire.

Jaki Fey understands the daily fears children face and the heroic deeds they perform to survive. Her humorous story shows how alittle girl became a hero. This book is available in print and is also available with full color illustrations as an eBook.

Jaki Fey’s second book is called “Wolf In My Pocket”. It follows in the footsteps of the Brothers Grimm. It is a mythic adventure, harsh, bleak, gruesome and redemptive.

Children of all ages (8 to 88) will enjoy this gothic adventure.

Good little girl Anka is called “uppity” and “naughty” because her spirit is larger than the Villager’s rules. The day finally dawns when Anka is “bold” one too many times and she is cast out of the village. The gate slams shut behind her. Afraid and alone and with no lantern to guide her way, Anka takes one step into the forest. Thus begins her journey to find her sacred self. This modern day, old-fashioned fairytale is a quest of self discovery and redemption taken by one brave little girl hero. This full color book is currently only available as an eBook at Amazon and Barnes & Noble.

Our first published book is a work of literary fiction. Persephone’s Seeds is a psychologically intense novel – dark, agitated, and imaginative. The point of view is inside the mind of its neurotic hero. It’s a very archetypal story. If fantastical stories and unrelenting disconsolate journeys of betrayal, manipulation and redemption sounds good to you, this is your kind of book.

As one reader said, “This book is a real scream of consciousness.”

Another said, “I’ve read so many books and your book is the most unique I have ever read. It takes you places no one could imagine. I highly recommend Persephone’s Seeds. It’s incredible. The subject is death, but it’s really about living.” – Dr. Veronica Esagui host of author’s forum and author of many books including Veronica’s Diary, The Journey Of Innocence

Safety Under Construction: For Frontline Supervisors and Construction Workers by authors Brion Hanks and Innovation Scientific (Scott Burr and Dayna Hubenthal) details how to make Your Safety the key to construction profits and schedule performance. This flies in the face of common  attitudes: (1). Safety is seen to slow down and even interfere with production; (2). People believe that everything reasonable that can be done is already being done; (3). We are dodging bullets but we’ve been lucky so far; and (4). People behave strangely and don’t always do the right thing. The fact of the matter is you can get to zero-harm if you approach the goal scientifically, systematically, process-oriented, and using problem-solving skills. This book offers new tools and introduces the behaviors and mindsets you need to solve the most challenging safety related issues within your organization.

“I have managed many construction crews and sometimes you face a critical moment where the quality of your field-call affects lives and a successful project outcome. So much is riding on what decision you make in that moment! ‘Safety Under Construction’ addresses this important but almost never discussed topic of split-second decision-making. Crew supervisors and managers will appreciate this valuable information. ‘Safety Under Construction’ raises the bar to an entirely new level of expectation for worker safety.” – Ophir Orr, Construction Industry Mechanical Engineer, P.E.